Come and discover your Ancestral Me

Come and discover your Ancestral Me

The rich history of Cordova every year attracts jews, christians and muslims who come wishing to know their roots in our streets, squares and monuments like the Mosque-Cathedral, the jewish quarter, the synagogue or the archaeological site of the City-Palace of Madinat al Zahra witnesses to the Golden Age which made Cordova one of the most important cities in Europe and the Mediterranean. 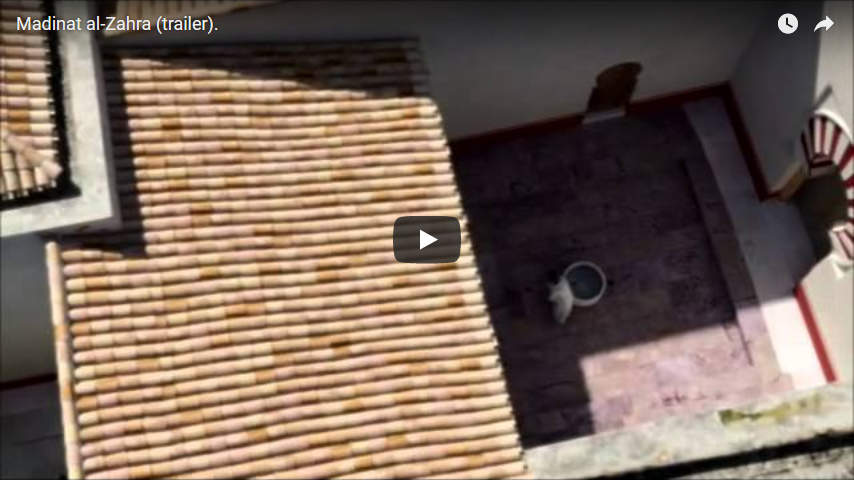 In 1984 the UNESCO included the Mosque-Cathedral in its list of World Heritage Sites and, ten years later in 1994, this denomination extended to the Jewish Quarter annexed to it. This prize confirms the universal condition of our city where visitors from many parts, be they jews, christians or moslems can easily find their roots. It will be precisely their past which will open their hearts allowing then to live an unforgettable experience during their guided visits.

VIRTUAL RECONSTRUCTION OF THE MOSQUE-CATHEDRAL OF CÓRDOBA 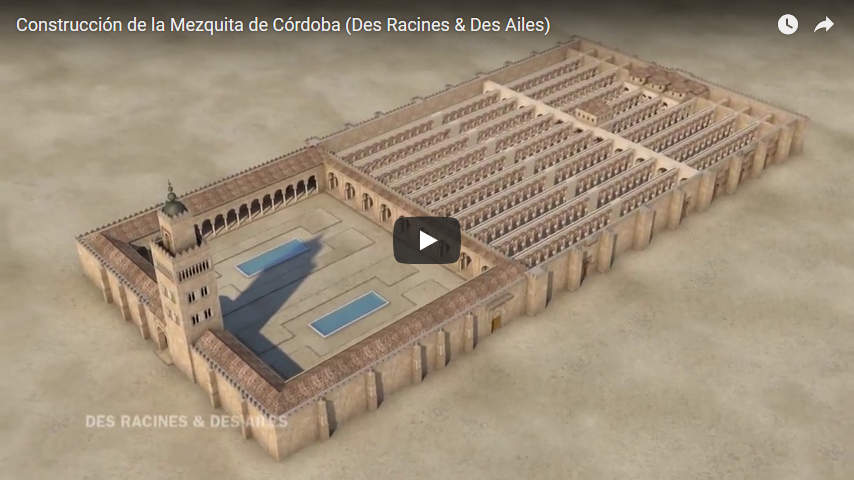 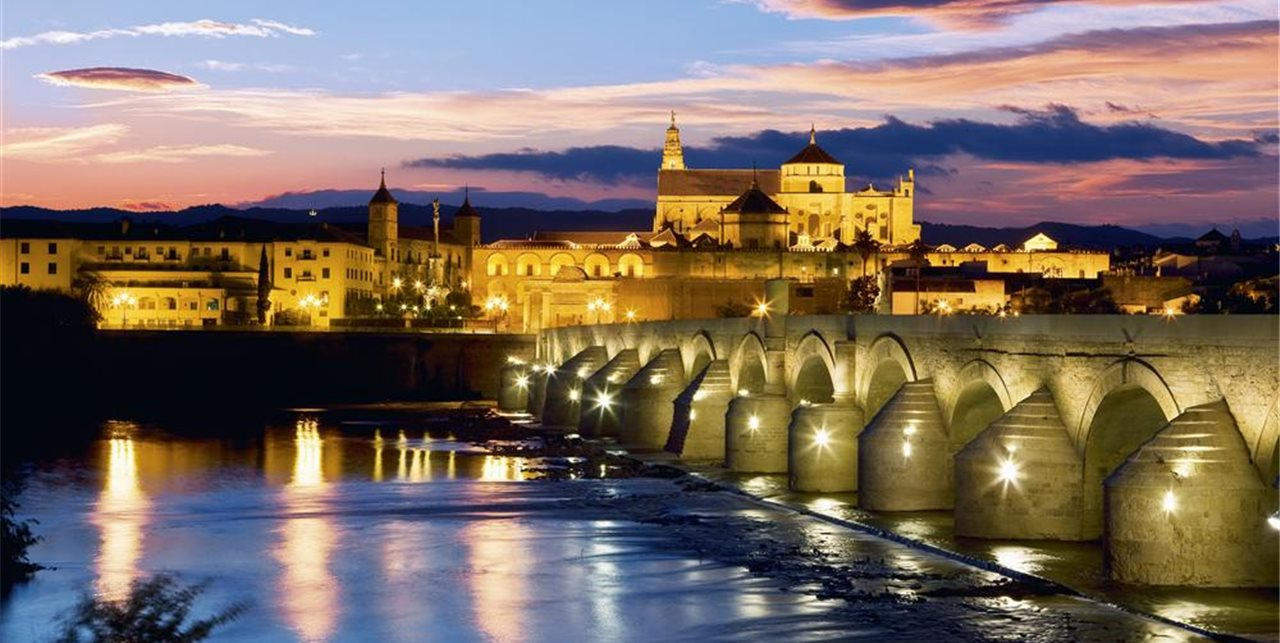 The Jewish presence in Sepharad ( the name given by the Jews to the Iberian peninsula) is previous to the Christians and Muslims. Their degree of identification with this land was such that the Jews of the Iberian peninsula started to call themselves Sephardim much earlier than the Spaniards started to call themselves Spanish. It has been proved that their presence in Spain extended for almost 15 centuries, beginning in the time of imperial Rome and ending with the expulsion by the Catholic Monarchs Isabel and Ferdinand in 1492. The Golden Age of the Jews in Spain coincides with the period of muslim domination especially between the VIIIth and the XIIth centuries a.d. when Cordova, as capital of the Umayyad caliphate, played a very important role as a centre of intellectual attraction.

During the guided tours to the Jewish Quarter we will go through some of the phases of the history of the Sephardic people while we lose ourselves in the narrow and twisting streets and small squares. On this private guided tours, of special interest is the analysis of the wave of repressions that the newly converted jews suffered at the hands of the Inquisition. 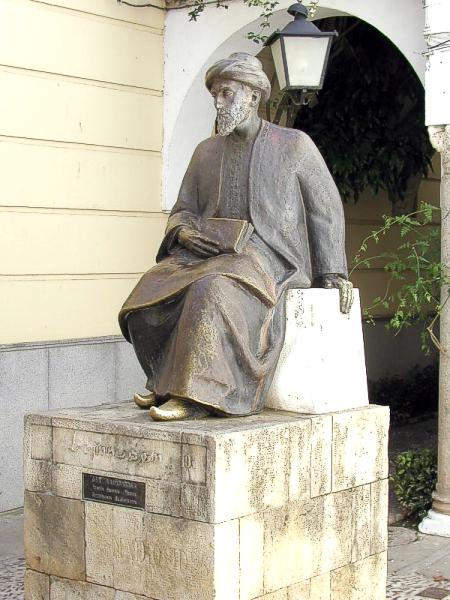 These are streets and squares where intellectuals walked down such as Hasday Ibn Shaprut, Jehudah Halevi o Maimónides (RaMBaM). Hasdai Ibn Shaprut (Abu Yusuf ben Yitzhak ben Ezra) חסדאי אבן שפרוט‎ was doctor to the caliph Abd al Rahman III and reached high possitions in the court taking over foreign affairs of the caliphate. Jehudah Halevi ( יהודה הלוי‎ ) was a doctor, philosopher and one of the greatest Jewish poets of all times.

The figure of the philosopher, rabbi and doctor Maimonides (Rabí Moshé ben Maimon , מֹשֶׁה בֶּן־מַימוֹן‎ Mōšeh bēn-Maymōn, known as RaMBaM “ha Nesher ha Gadol” “the great eagle”) is of such important that he overpasses the Jewish world, author of such works as “The Guide for the Perplexed” (מורה נבוכים, Moreh Nevukhim) or Mishné Torá (מִשְׁנֵה תּוֹרָה‎‎, “Repetition of the Torah”), used today in all the “yeshiva” academies of Torah, lived as well as Jehudah Halevi in Spain in the XIIth cent. a.d., a difficult period under the moslem Almohad domination who forced him to exile. In Egypt he became the personal doctor of the sultan Saladine.

Our guided tour in Cordova will finally take us to the XIVth century synagogue built in the “mudejar” style when Cordova had already been conquered by the Christian troops of Ferdinand III the Saint. 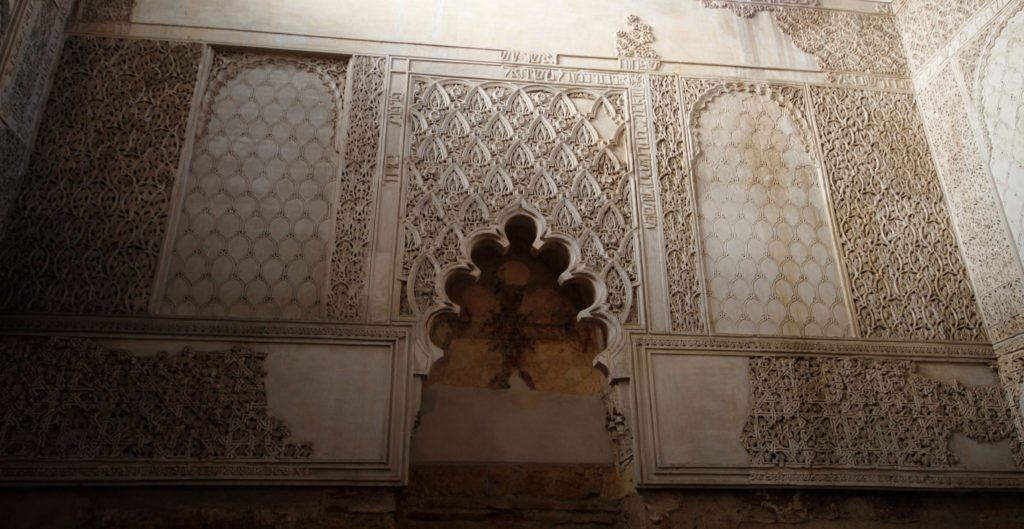 The word synagogue comes from the greek “synagogue” which comes from the verb “synago” meaning “to come together or to meet”. In hebrew it is said “Keneset” (meeting place).

The prayer room is richly decorated with geometric, floral and epigraphic motifs taken mostly from the Book of Psalms.

After the expulsion of the Jews in 1492, the synagogue became the hospital of santa Quiteria for people suffering from rabies and later in the XVIIIth century all the walls were plastered over covering the Hebrew texts. In the XIXth century, when this place was a school for boys, it was discovered that it had been a synagogue and declared a National Monument.

The word “mezquita” comes from the Arab “masjid”.

During the guided visits of the Mosque-Cathedral, although the tour guides opt for following a chronological order we will make some jumps forward and backward which will make the visit richer.

The guided tour of this unusual monument, former mosque of Cordova, made into a cathedral in 1236, begins in the VIth century a.d. with the construction of the visigothic basilica of saint Vincent.

With the arrival of the muslims, at the beginning of the VIIIth century this church will be a place shared by the two religions. A few decades later, however, because of the demographic development of the city of Cordova the emir Abd Ar-Rahman ibn Mu’awiya ibn Hisham ibn Abd al-Malik عبدالرحمن بن معاوية بن هشام بن عبد الملك known as Abderramán I o Abd al-Rahmán I al-Dājil الداخل which means “the immigrant”decided to buy the Christian part to demolish the church of saint Vincent in order to build a mosque in its place.

Abd al Rahman I, belonging to the Umayyad dynasty managed to escape the massacre of his entire family. Here, in the western confines of islam, he managed to create an independent Umayyad emirate with its capital in Cordova (Qurtaba, Qurtuba) إمارة قرطبة, Imārat Qurṭuba.

Thirty six years later, in the first half of the ninth century, his great-grandson Abd al Rahman II made the first enlargement of the mosque due to the increasing population of the city. It was a period of economic boom and intellectual renovation. We can recall the arrival from Bagdad to the court of Abd al Rahman II of Abu l-Hasan Ali ibn Nafi` أبو الحسن علي ابن نافع otherwise known as Ziryab زرياب “blackbird”, poet, musician, singer, specialist in food,…With this enlargement the mosque doubled its capacity for up to 10000 faithful. 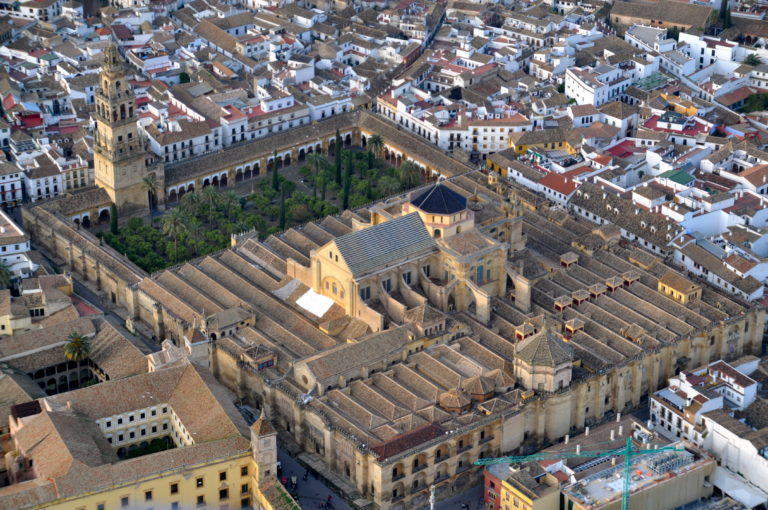 The enlargement of al Hakam II

The following enlargement of the mosque was the work of the Caliph al Hakam II “al Mustansir bi-l-lah” الحكم بن عبد الرحمن, o al-Ḥakam ibn ʿAbd ar-Raḥmān due, once again, to the increasing population of the city. An intellectual and pious caliph, he founded a library which had no equal in the west and in coherence with his religious character on the day after he rose to the throne, he ordered his prime minister the eunuch Ya´far ibn Abd al Rahman the enlargement of the mosque. This enlargement is the most beautiful, not using recycled materials as opposed to the two previous phases of this building. Its four domes created a strong focus of sunlight on the Maqsura area (the area reserved for the caliph and his entourage to pray). At the back, as a highpoint of this enlargement we can admire the mihrab with its rich mosaiques from byzantine workshops, a gift from the emperor of Byzantium. With this enlargement the mosque reached a capacity to hold 15.700 faithful.

The enlargement of Almanzor

This enlargement was not made by an Umayyad sovereign but by a dictator, the all powerful prime minister Muhammad ibn Abi Aamir أبو عامر محمد بن أبي عامر ابن عبد الله المعافري al Mansur المنصور “the Victorious” who took advantage of the young age of the caliph Hixam II to take over power. This enlargement was a gesture of political propaganda which gave more importance to the quantity than to quality. In fact, with this enlargement we pass from 15700 to 40000 faithful praying. We can note the large quantity of qualified muslim workers as well as christians and even jews who participated in the works as we can see in the plaster molds on the way out of the treasury.

High Altar, Transept and Choir of the Cathedral

On the last part of our guided visit we will concentrate on the construction of the High Altar, the Transept and the Choir of the Cathedral finished in 1607. As we will see the high altar was not always in the centre. During the middle ages, from the conquest of Cordova by Ferninand III in the XIIIth cent. until the XVIIth cent. the high altar was located “at the corner of the church” as historical texts of the period tell us. Moving the high altar to the centre of the cathedral brought about a confrontation between the bishop and the city hall. The argument was so great that the emperor Charles V himself had to mediate in its resolution.

Because of this expanding period of construction we can see a conglomerate of artistic styles: arab, gothic, renaissance and baroque. The most important masters who participated in it were Hernan Ruiz I, Hernan Ruiz II and Juan de Ochoa.

Of great importance are the XVIIIth century choir stalls, the work of Pedro Duque Cornejo made of mahogany from the Antilles. Its iconographic program tells the story of the lifes of Jesus, the Virgin Mary and cordovan martyrs.

VIRTUAL RECONSTRUCTION OF THE MOSQUE-CATHEDRAL OF CÓRDOBA

Madinat al Zahra, candidate to the world heritage sites list by UNESCO in the year 2018, means “the brilliant city”. 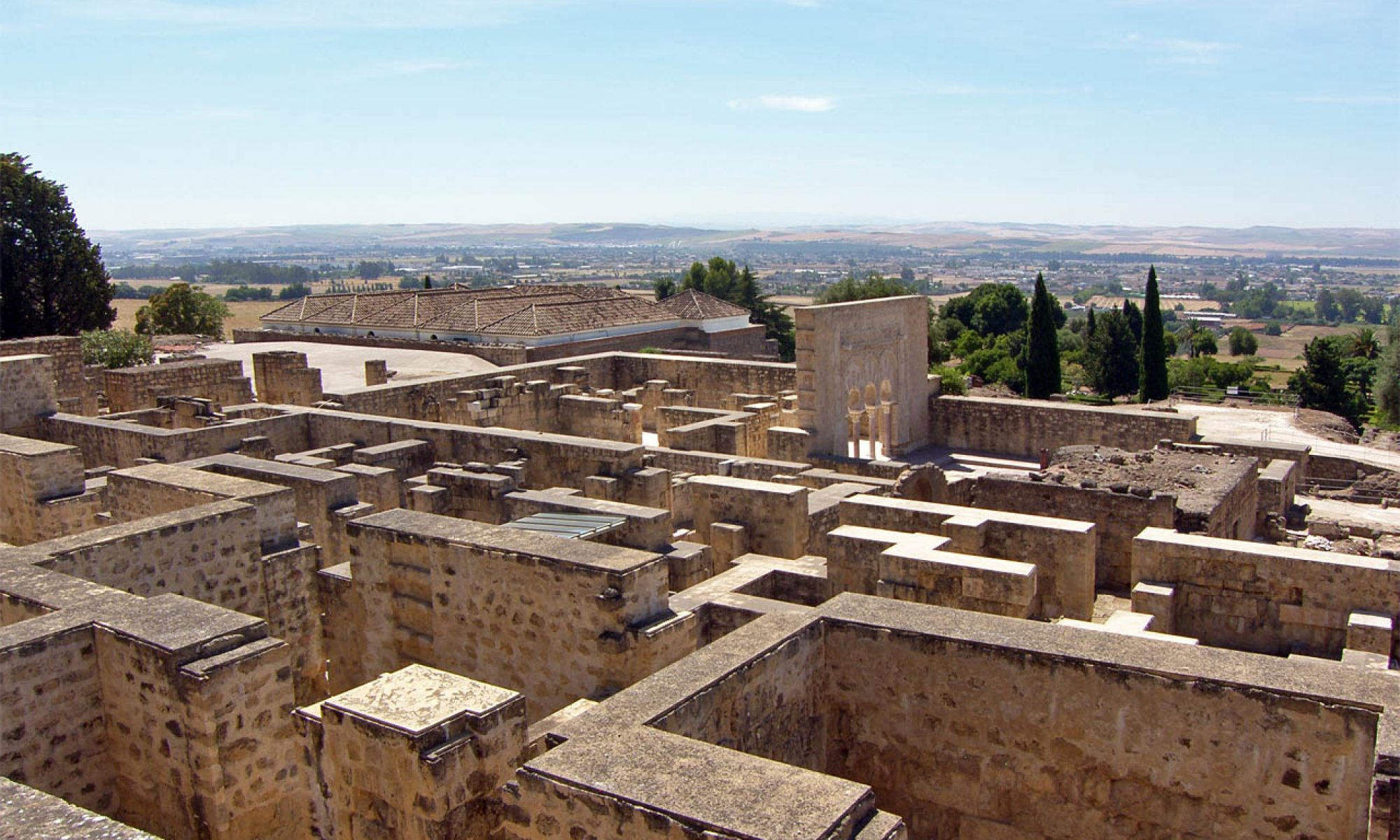 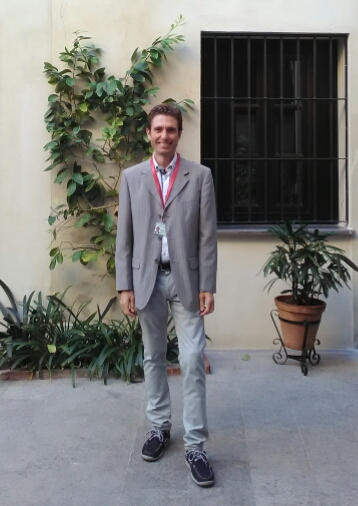 My name is Rafael Jesús Álvarez Córdoba. I am a licensed tour guide in Cordova, Andalusia (Spain) in English, French, Italian and Spanish (lic. num.1111). My experience in the field of the interpretation of artistic sites and wide knowledge of the moslem and jewish heritage of Cordova are key factors to creating an unforgettable experience for the visitors.

During my tailor-made private tours, visitors will have the possibility of having a close interaction with me as well as the different places we will visit together in a relaxing way.

My wish is to share with you the love and knowledge I have about the moslem/jewish heritage of Cordoba so as to make you feel like coming back here! Take a private Cordova tour with a knowledgeable local guide and get ready to be charmed by this ancient city.